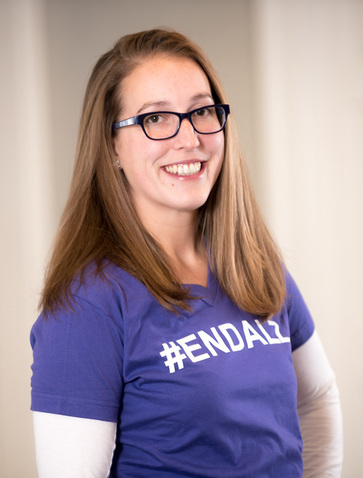 I became involved with the Orange/Sullivan Walk to End Alzheimer's Committee in 2013 after moving away from my hometown as a way to give back and stay connected when I was no longer able to help care for my grandmother. My Grandma Jennie first began showing signs of Alzheimer's in 2004/2005, shortly after my grandpa passed, but as a teenager, it seemed slight, and the impact hadn't hit me yet. It wasn't until I went away to college and each time I came home, it was a bit worse. I moved home post-graduation in 2009 to start working and was now able to see and experience the daily effects of Alzheimer's as my grandmother lived next-door to us. I experienced all of the trials and tribulations that families affected by Alzheimer's: The feeling of guilt, the aggravation, the family disagreements over next steps and how your loved one should be cared for -- and the list goes on. Unfortunately, these feelings and effects are "normal" for all families to experience when coping with Alzheimer's disease.

In addition, my other grandma, Dolores, has also been diagnosed with Alzheimer's and has been suffering with the disease for more than six years. Both of my grandmothers were vibrant and loving wives, mothers, grandmothers and friends. It was heartbreaking to watch Alzheimer's take away my Grandma Jennie's voice and love of conversation and my Grandma Dolores' ability to travel and see her friends.