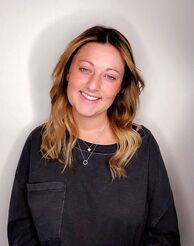 Member of Young Professionals Alzheimer's Council
​
Kristen Levy is from Armonk, New York, but currently resides in New York City. She graduated from the University of Pennsylvania in 2015 with a B.A. in Communications and a minor in Creative Writing. Kristen is Lead Manager of Advertising at AT&T and has worked in social media marketing at several advertising agencies. She has a food Instagram (@iflyfood) and plays tennis in her spare time.

Kristen lost her grandmother to Alzheimer’s when she was just 17 years old. Ever since then, she has worked diligently to fund research to help find a cure. She founded the University of Pennsylvania team for the Philadelphia Walk to End Alzheimer’s, and has been walking in the Westchester Walk since 2011. Her mother, Cindy Shmerler, is a member of the Board of Directors of the Hudson Valley Alzheimer’s Association. She has continually been one of the top fundraisers for the Westchester Walk to End Alzheimer’s and a Top 100 fundraiser nationwide. She has raised more than $150,000 for team Byram Hills/GAGA, founded by Kristen’s brother, Maxwell, in 2011. She is very excited to join YPAC - together, we will help find a cure!